My imagination was trying to console me, as if saying, I am at your disposal, my dear friend. Make full use of me, and show the world, your mettle.

I was aware this was no easy cup of cake.
But, imagination was very excited, as if it would surely net the top notch prize for me.

Harsh reality was showing me my old, tattered ambassador car, refusing to start up now since years, let alone taking me to a beautiful destination.

Seeing my face sullen, imagination brought forward an array of classic cars at my disposal. Should I take the jeep gladiator or the Jeep Hurricane, choice was difficult, but I chose the Jeep Hurricane as it could spin like a top in one place. Simply amazing. 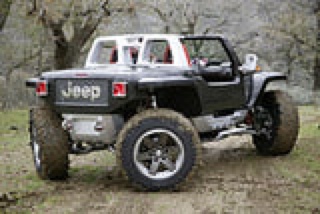 My imagination had brought in the vehicle, and now the choice of persons to accompany me on the trip.

I turned my attention towards imagination again. Imagination gave a wicked smile at me, as if I was calling in Sunny Leonne as my travel companion. I gave a stern look towards it, and pitched in the name "Mr. Bean aka Rowlan Atkinson." 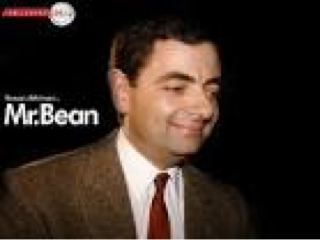 Before imagintion could utter some words, I clarified the vision behind the call for Mr. Bean as companion. Mr. Bean wouldn't utter a single word during the whole voyage, so he will be at my disposal always. All the more, Trip would be a hilarious one all the way. Yo! He was just the perfect companion for me.

Now came in the most ardent of all the tasks, the destination. Leaving out on one destination, would definitely annoy it, as all wanted a tete a tete with me and Mr. Bean, but decision had to be made fast. Time showed 7:51 and the trip hadn't even taken its "Get set , Go" signal.

Imagination was very agressive now, saying, take up an all round tour, covering the whole India, but I shrugged off the fabulous idea, as unfeasable, within the time constraints.

Though my imagination was cooperating with me to the helm, but I had to be practical. Let's enjoy the beauty of Mystic Mustang in our Hurricane Jeep, with our friend Mr.Bean, taking the pictures of me in sync with the mesmerizing Mystic Mustang.

My imagination was giving a wry look now, I was worried, where I was going wrong. Ohh gosh, I hadn't thought of it. The rains would dampen everything in open jeep.
I told imagination to take utmost care of weather too. Pleasant cool winds, carrying the scents of flowers should drench the nostrils all the way.
Mr. Bean was smiling. He too was all the more excited.

Time showing 9:28 p.m. and with just two hour thirty minutes left, task is immense.
Aah, what am I seeing. A message just flashed on my mobile screen saying my mobile number has won me a laptop. I will be just right back, after seeing if it's not a hoax or something, till then readers can play with their own imagination.

It was an hoax message, just giving the exact message for you all to see how idiots these people think we are.

My five minutes drained in this too.
Mr.Bean is gesturing frantically to start the tour and take on to the steering wheel himself. I gave him full powers, to do as he likes, and we began our scenic journey, in our Jeep Hurricane. 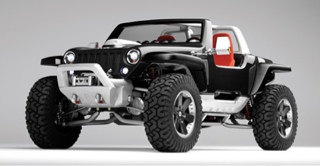 The pleasant weather is entycing the mind. A good news I just saw, the time frame of 21st july deadline got extended to 24th july. The spirits of my imagination were soaring high.

Mr. Bean and Me and my Imagination left for Mystic Mustang, swooshing the jeep, in ishtyle, off the highway, towards Nepal.
The pleasant northerly winds gently swishing on the hair and cheeks, refreshing full mind and soul.

Mr. Bean is making gestures, twisting his head and rolling his eyes, indicating he is enjoying the whole setup. Hurricane is hurricaning the road at jet speed.

Friends, The weather was turning little cloudy, and I thought it better to be on look out and check-in at a road side Motel, before it rained and we got drenched.

We both settled ourselves in a cozy motel by the road side, satiated the tummy desires with the lavish pure cuisine. Rain had started pouring heavily by now, and I was relaxing in the verandah with Mr.Bean, enjoying the heavy downpour. I patted myself on my quick thinking, otherwise we would have been caught up in the rains lashing. Mr. Bean winked at me, as if he too was thinking, what I was thinking. Mr. Bean excused himself to go to check if no water was leaking on the hurricane in portico. I was slowly getting awed by his sensibility. Again I patted myself on choosing Mr. Bean to be my companion on this wonderful trip.

Morning dawned and we started enroute jomsom, Aka Mystic Mustang. We had entered the area after paying the due taxes at the entry point.

On reaching the Damside to the office of National Trust for Nature Conservation, we made our trekking permit. The destination Mystic Mustang aka Jomsom came under Annapurna Conservation Area, and it is the largest protected area of Nepal. 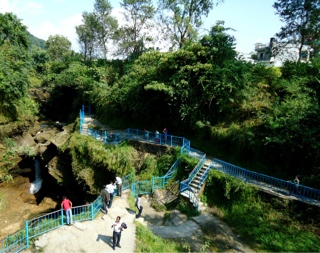 There was an attractive place nearby, Gupteshwar Gupha, said to be 5000 years old, and there was no other option but to either walk or hire bicycles for the same. 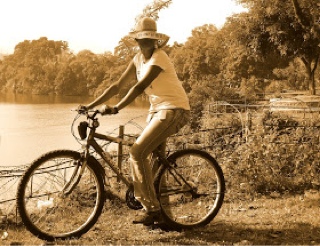 We parked the hurriane in safe place and hired great geared bicycles to trek along. Mr. Bean was thoroughly enjoying the whole thing. He was upto his antics now in bike, and I just hoped he doesn't fall in some ditch trying to turn his bike like the hurricane jeep on it's axis.

The Gupteshwar Cave was breathtaking. See for yourselves friends. 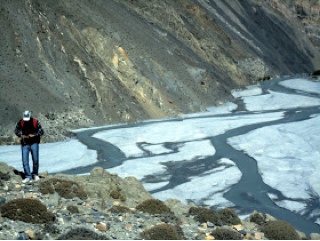 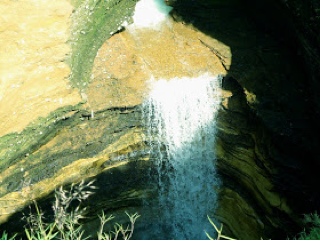 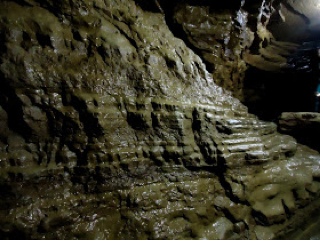 We enjoyed every minute bit of beauty sorrounding us. Filled with energetic vibes we reached back to our hurricane jeep.

We started off for Mustang, in jeep, but this time the drive was slow, as we wanted to grasp the breathtaking view all along the way. Seeing the pictures you will realize yourself friends, which heaven we had witnessed. 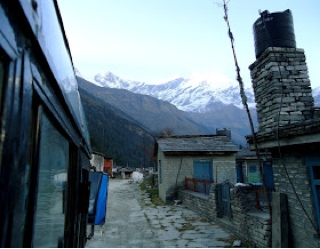 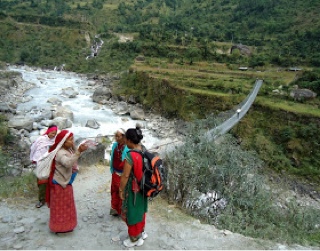 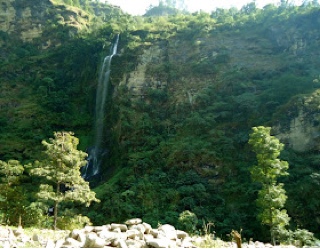 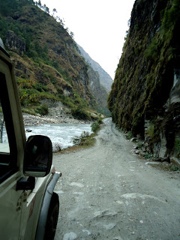 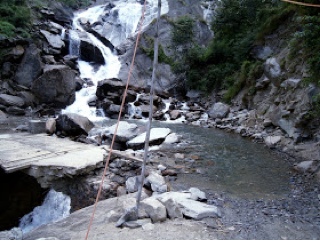 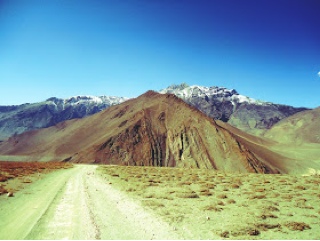 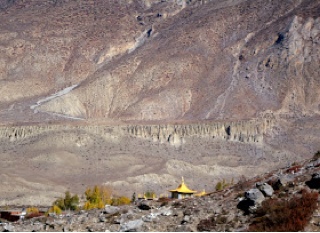 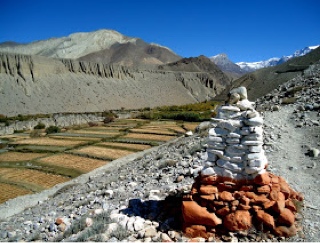 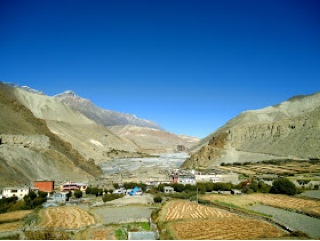 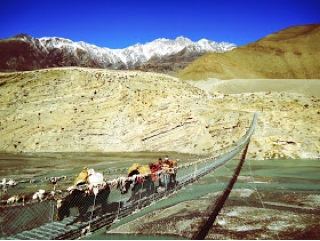 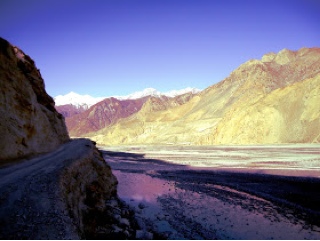 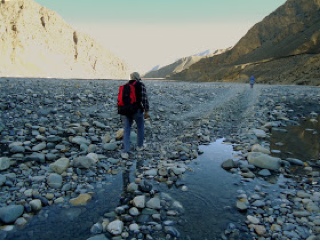 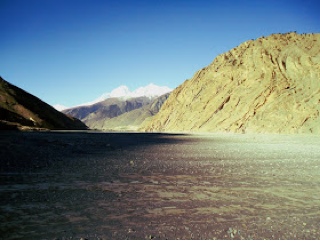 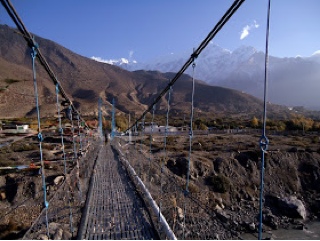 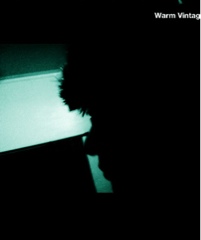 We returned laden with a dream like state, after savoring the beautiful true to it's words, The Majestic Mystic Mustang.

All the pictures are courtesy of the heroic traveller Anunoy Samanta, as I had been inspired by him to visit this place after all.

Picture of Mr.Bean and Jeep Hurricane is courtesy of Google.

This post has been inspired by a contest at indiblogger for ambipur india.