This is the occasion, much awaited, silver jubilee, and rightly, We were headed towards Bangkok, here, we constitutes myself  my wife and my two sons.
At Bangkok airport, as we were about to exit the airport, elder son chirped, we should rent a car and he would drive it to town. We had landed there first time in our lives. I had never seen him drive too. I had just heard that he could drive auto gear cars. I just shivered at the mention of it. I was a bit, tad relieved when he couldn't find any, as all were booked.
We took a prepaid taxi, for the hotel, that my younger son had booked over net. The driver of taxi, couldn't find the hotel, by the address given. Younger one, who was sitting next to driver : "ye wahan chalak humein ulloo bana ke thagna chahta hai."
Eldor one : there is no hotel by the name you booked, at sukhumvit 40, you have been cheated.
I was getting hopeless now. It was getting late, approaching 9 pm. I told the driver to stop at a gas station. I requested a person there, it was a relief as he searched google over phone and came up to driver to explain the route to him, but he was unable to understand him too. Or he was trying to be cheesy. I then asked the generous helper, which way I could dial a local friend no. He guided me' and when I told the driver to talk to him, he had understood the address clearly. And thanking the helper, we reached our destination within three minutes. The looks from outside wasn't great, but rooms were great. Since we were fully tired, we ate some home food we had brought and hit the sack.
We were to be in Bangkok just one day,    So we were all all eager to make use of  every minute on hand.
First thing on agenda was to meet my long lost school friend after a long span of 31 years. We reached his shop "raja fashions". When we reached his shop at sukhumvit 8, we were all surprised to see the shop bristling with herd of customers at the start of day. Seeing such rush, I tried to backup, and meet him later at night, but he had seen the gate open and came rushing and gave a strong sardar blow on my back," Maula, mota ho giya be, (maula my nick name of school,  grown fat,".) I couldn't believe my eyes. I saw a maintained perfect man before me'. I wondered hoe he had been able to maintain sound physique. He led us to a sofa, and graciously took order of choice of beverages from my wife and sons, and me' too. I told him to tend to his customers, being a businessman myself, I knew importance of attention of owner on customers. I looked around his shop casually. One wall full of autographed pictures of my friend with Bill Clinton, George Bush, and many renowned personalities. His medals of golf tournaments on display.
Having enjoyed the beverages, we took his leave with a promise to meet in tha evening, and a great impression on our minds.
The whole day seemed to pass away in grand haste, as if there was a race to be won. We did some shopping and roamed around malls and we were headed merrily, towards my friend's shop. I bought two trouser material for myself from The wide variety of premium cloth material. He then took us to his hotel On 8, at sukhumvit 8, near metro station.  It was a real class. Then over the table, while munching the delicacies, we shared old-time memories. All the time, he kept lamenting on my short visit. He wanted me' to stay there atleast 10 to 15 days, and we were booked to leave for Singapore early next day at 5 am.
We parted with heavy hearts with hopes to meet again.
Time was flying by. Our next destination beckoned, and we all were entering the ship of super star virgo, at harborfront station at Singapore. Saving a small mishap, of missing the bag containing passport at pizzahut, all was just gungho, thanks to the lady serving us, as she rushed to give our bag to us.
Our mood all the more jubilant, we adjusted to our allotted cabins. I handed over a fixed amount of pocketmoney to both sons, to spend as they like, that is Casino mongering limitation.
Younger one, was busy reading the itinerary provided in the room. 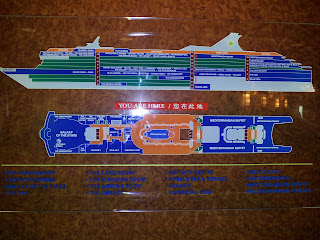 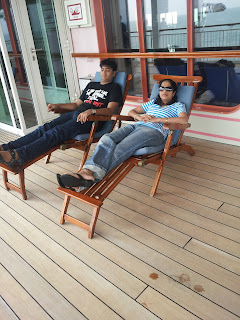 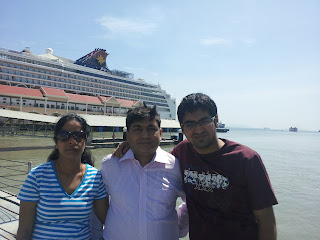 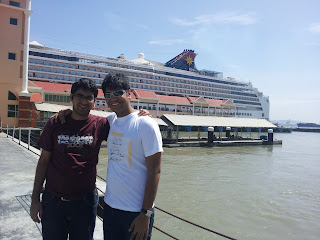 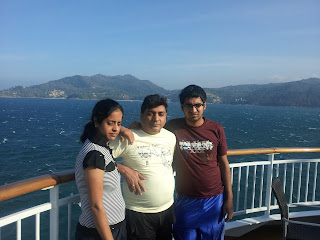 An announcement for compulsory  emergency drill was sounded and we had to cough out expensive twenty minutes of enjoyment for the military type workout.
then our rendezvous began, as if we had come to some Indian wedding. More than 50% occupancy on ship was of us indians. The free food at Mediterranean hall was centre of attraction of all. Having given taste buds their share of enjoyment, a small nap was desperately needed. I left my team to explore other avenues, I went to my cabin. I woke by bangs at the door. Before I could understand the matter, younger one, who was breathless from running to the cabin, started saying in hush-hush voice: "Papa, bhaiya 400$ casino me' haar Gaya hai'". Uska mood off hai' , apne cabin me' soya hua hai' "

I was getting things in place now. I blurted : " Lekin Maine to 200$ hi diye the"
Younger : "mera 200$ loan le ke wo bhi haar Gaya. "
I could understand it. But it would have happened so fast I hadn't imagined. It had been a great harsh lesson for him to digest. I felt pity, but I was happy he would never turn to casino again due to the harsh lesson but I had to console him. At the start, mood had become glum.
When I reached his room, I saw my wife sitting gloomily beside him. I said, " don't take anything to heart. You will get your pocket money. But now don't even go near the gates of casino."
Let's play table tennis. His mood was real off. He said he needed sleep.
I knew I had to do something fast. I left them all in the room and headed towards casino. I took tokens of 100 $ and started betting judiciously. My luck really favored tad too fast. Within 15 minutes my both pockets were full of tokens. I excitedly went hurriedly to the cabin with the booty.
We counted the tokens, luck had given extra 140 $  as bonus.
No one was believing me' they said I had bought the tokens and showing them as a win, to keep the mood going.
No matter how I said, they wouldn't just believe.  I said ok. " we go to casino, and I will show the counter, where I got it. The mood of everyone was upbeat now. We went in and en-cashed the tokens to $.
Outside the casino we met a couple "the indorias" he had been looking for some one to talk in Hindi. He caught hold of us in an instant. He started blurting : "mujhe English ka abcd kuch ni aata Ji , maine 500$ ke token liye, aur bas casino me' jis table pe Jo jeet raha hota na, uspe paise laga deta, aisa karke, main 5000$ leke aa raha hoon."
We all stood gaping at his luck.
Then he started to give some fatherly advices to my sons. About yoga exercises, benefits of drinking lots of water etc. Etc.
We all went and had delicious supper.
Next morning we alighted at Penang port in Malaysia.
I had not booked any sightseeing tour offered by star cruise. We planned to bargain and hire an independent taxi. There were many taxi drivers at exit gate, trying to woo passengers for hire. We neared the gate, hearing casually the rates of all, and some shouting their lowest possible rates too.
At the end of the gate we saw a lady taxi driver, immaculately dressed, and the first thing she said, was her car was best one around here and she would charge 200 ringitts only for whole day tour. We saw her car, which was indeed great. We all hopped in, with the younger son taking the seat next to driver as usual. Her name was Suzie. She was very talkative, such that even our Basnti of Sholay fame would lose the competition. At the start itself she ridiculed the cars of Malaysia make. Her was a japan make. My son enquired of her for wii-fii, availability in penang. She pronounced wii-fii as weeee feeee, and it to be free in whole Penang.
My son tried and was excited to be able to connect his facebook friends.
Suzie kept her commentary on, nonstop, as she passed senate hall, or big hotel , or mall, we were getting enlightenment to the full. We reached the temple of reclining Buddha, we offered our prayers there and then we were taken to goddess statue atop the hill. Here. we were delayed due to rush in ropeway. The most interesting thing we all appreciated was the worry and pensive look suzie gave on our return. She didnot refrain from saying that also, that how much worried she was for us. It looked as if we were a family.
We had tea together with suzie now.
Over tea, Suzie narrated her tale, how she had been mugged once by criminals of her belongings. And how she was pressurized to retract her case. She was divorced, and lived alone. She told us about an apartment building facing the sea, is where she lived, on the eighth floor facing the sea,  I remembered of Tsunami and asked her, what had happened in tsunami. She shuddered at the mention of it. She said she was thrown off her bed by strong water force. The building shaking. They were saved as building was new and well built.
I noticed she was wearing a deadly yellow sapphire ring in her ring finger. It looked like an 11carat, juvenile piece. I complimented her for the sapphire, which she said was given to her by her Jeweller boyfriend who was desperate to marry her, but she had turned him down. This sapphire should be placed in index finger as per palmistry, so I suggested her to change it to index finger, to see the talisman energy of sapphire to bring riches and glory for her. She said, it was to be worn in index finger only but it didn't fit so she had put it in ring finger. I advised her that any jeweller would resize the ring in minutes. Having had our fill we all went out for shopping adventure.
Here too, Suzie took us to the best money changer and we converted dollars to ringitts at best rates. We all took some cheap bargains and it was time for ship. We all started to go there, but suzie said she could drive us to famous Penang bridge, in the little time left. We accepted it in delight, though my business mind appreciated her sincere efforts. No sane person would elongate a finished job. Suzie  was like a family member.
Time came for parting and we all with rejoicing memories of Penang entered back to our Ship.
This travelogue has been inspired by

Around The World With Expedia contest