Posted by : RioZee Saturday, April 5, 2014
The cabin was smelling like hell. The bacterias in the sweat on skin had started fermenting and the horrendous odour was swaying in all directions encapsulating anything it could lay it's hands upon. The person emitting the scent was wholly engrossed in his work, all unknown to the heavy ciorse in the atmosphere sorrounding it, that had been slowly forming.

The new entrant into office was a timid but intelligent bloke and all old sleuths were eyeing on his first day reactions. The full office was at pindrop silence module and all movements were curt and disciplined. Mr. Sharma had purposely asked the new entrant to bring the file of Mr. Surana from the cabin of Gadgor Babu and the new entrant slowly moved towards the cabin. Everyone held their breath as the new entrant knocked at the cabin gate and entered the smelling dungeon.

Everyone had expected a loud shriek  and panicked exit of new entrant from the cabin of Gadgor babu, but five minutes had elapsed and no sound emerged and the curiosity of everyone grew up to bursting extent. Mishra ji whispered to anxious Sharma ji, "I only hope he is still alive. Poor fellow, this was his first job experience, and look what you did to him."

Sharma ji defending himself, "I really needed the file Mishra, and one day he had to face it, so why not today itself."

Sweety chipped in, "It is really preposterous coldblooded stab Sharma, I still remember the first entry of yours into the room of Gadgor Babu."

Sharma feeling the brunt of being attacked, "I had remained one full minute in the room and brought the file......"

Sharma showing burning eyes at Gulguli devi,"how can I forget, you had asked me to get that good for nothing file."

A serene smile of satisfaction danced upon the lips of Gulguli devi.

Mishra trying to make truce,"let bygone be bygones and see the current task at hand. I fear something dreadful going within."

Sharma ji mincing upon his words, "what, me!!, no way, why don't you go Gulguli ji."

Gulguli devi agitatedly, "why should I.? You sent him to bring a good for nothing file just to torture poor fellow. It is your responsibility and mind you, if the poor guy chokes   upon his breath, which I am dead sure now, it will be entirely upon your conscience."

Sharma rebukingly, "and where was your conscience Gulguli, when you had asked me so lovingly to bring in the dead file, upon which I had puked all over."

Mishra ji trying to pacify the two, "come on, no fighting over this, we wait for another five minutes, then we all will go into Gadgor babu's cabin and bring out our new entrant."

In these five minutes allow me to give some breif about our New Entrant as fast as I can. Weirdest of smells had failed to deter the New Entrant as he had the privileged stay in hostel where people seldom bathed and had no pocketmoney to spend on expensive deodorants. His all 400 receptors of odour in nostrils had thrown in the towel long ago. He could stay in room with his fellow students with stink bombs blasted all over just to keep teachers away from class. Little did he know then that this invaluable stink resistance quality was going to earn him a respected place in the company in later stages of his life.

Five minutes had gone by and all the crew moved towards the cabin of Gadgor babu with perfume dipped handkercheif strongly tied around their nostrils. Sharma opened the cabin gate slightly, took a quick peek inside and shut the gate reverting into severe coughing and choking hysteric bouts. Mishra supported the falling sharma and slowly staggered towards his chair. Sharma after regaining some breath and removing the handkerchief from the nose muttered,"Ohh my Gosh ! Unbelievable, How the hell is it possible"

Gulguli Devi getting closer to Sharma, "what did you see Sharma ji that your face has turned dead white. Has our New Entrant collapsed."

Sharma serenely adjusting his bifocals looked at Gulguli devi and burst out a long sigh.

Mishra getting impatient, "do not play on our patience Sharma ji, say fast."

Vicious smile ran on Sharma's lips. Enjoying the air in the atmosphere Sharma gave the verdict,"Gadgor babu has found an underwear friend in our New Entrant I presume, the way they were laughing and chatting. We all are doomed as this New Entrant now may get above us in rank and we the old sleuths will all have to obey the orders of this good for nothing New Entrant.

Gulguli Devi chirped,"Sharma ji, you better brace your nose up as he will take revenge on you and order you to bring files from Gadgor babu's room every now and then.

Sharma getting paled by the blow mumbled, "well, I will quit rather die an unnatural death."

Mishra trying to console Sharma ji, "You had selected the New Entrant into the company and he would certainly remember your generosity."

Gulguli Devi putting all blame on Sharma ji,"How could you not sense his smell proof nose, and put us in this peril."

Suddenly two people entered the office with Racold geyser and inquired the location of Gadgor babu's cabin and before Sharma & team could understand anything what was going on, the two had done their act and left the office. 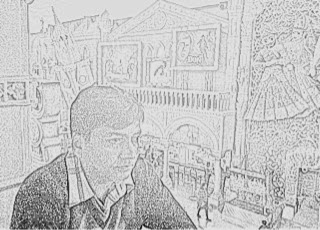 The cabin door opened and New Entrant was seen walking towards the group with smile dancing upon his lips. Behind him in tow was Gadgor babu, beaming with the freshness of Racold bath. Sharma & team got the shock of their lives. They had always seen Gadgor babu with amplest of distance they could muster and with handkercheif always stuck to their noses.

The New Entrant had become the Company Hero on the first very day of his job start up. Everyone had only one thought, "why didn't they think of this remedy themselves."