With the Indian population rising at an alarming  rate, my worried mind was looking haplessly for the ways to control this menace.

I had a talk in Surat with a labourer, he had 5 sons,3 daughters, one coming within a month.
I tried to explain to him about the care he would be able to give them, if they were only two, but in vain. He said just after six years they start earning for the family.
Children are poor man's wealth.
Two years ago a news found a place in Times of India news front page,"A havaldaar in Mumbai had 56 children and 57th was rearing to come out. When questioned how he would feed them, he meekly said," jo allah ne bacha dia wohi thali bhi dega."
Recent hoardings seen in Metro in Delhi,"We are going to win from China.By 2035, our population will beat China. Do we need this type of winning.

Union health secretary, P K Hota says, "We are not in favour of any coercive methods. We would rather give options to couples.

Lack of stringent action by the govt.,  sleeping poor people of India are responsible for this destructive problem. We see,
roits, fighting over food, water, largest slums, cities  like fish markets, with people everywhere. Traffic,  the ants party.
The poor, can never be robbed of their wealth, Children. Then where the solution lies.
My mind wonders. 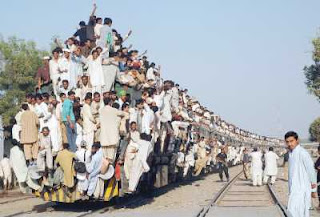