A Tryst With Past Life Part 4,

Posted by : RioZee Wednesday, March 5, 2014
My trance was broken by meekish words of Sukar da. "Kee bhaabchen Somesh babu, aamar gola kete ei amaar antoheen vyothar anto kore din."( what are you thinking Somesh, just cut my neck and finish my endless agony I have been living with.)

I contemplated putting up 5 lac issue, but sensed he might throw up again, so decided to extract the mystery with patience.

Many friends I see, who have come this far have started thinking it is a fiction. But my earnest endeavor is to keep it on exact track and not deviate no matter what.

I was extremely cautious with my wordings now.
Sukor da, I began, "I may fulfil your wish, but only if you answer my curiosity. What is the name of the lady in the portrait? How you are related to all this?"

Sukor da started with a heavy sigh, "the lady in the portrait is your beloved wife Chandrabhaga, and I am her ill-fated father."

Now I was more puzzled. This man was my Father in law then and what had he done wrong that he was admonishing me to kill him. I see my portrait with my Chandrabhaga, that means we were happily married, I presumed.

Now I had to tread more cautiously. Friends who have the gut and believe me to be a true to my word man too may be baffled by the extremity of the turn around of events. Keep yourselves braced with an open mind, as the things that you and I are going to witness are simply unbelievable for ordinary human being. But we all are above the ordinary, so I continue with the tale.

Sukar da continued, "My house was just opposite yours and I was totally against your marrying my daughter. But you were very adamant and despite my wrath, you had married her in a temple and took her as your bride in front of Maa Kaali.

I was a man of orthodox beliefs and thought that this Love marriage thing will corrupt the society. I initiated a meeting of learned men to ban you from community. Nobody invited you to any social functions then. I should have been satisfied with the ban, but no, I ventured a lot further. I feel so miserable at heart, I passed each second repenting in front of godess Maa Kaali. I just prayed I wanted to see my son in law just once and seek forgiveness in person....,

I contemplated to ask the 5 lac issue now seeing Sukar da a little adjusted
with the environment. 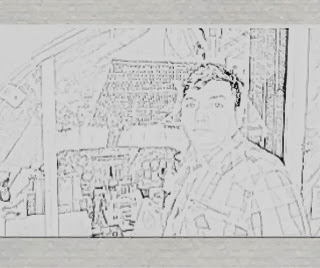