Posted by : RioZee Tuesday, March 11, 2014
Smell, reminded me of many memories. My thoughts reverted back to the news I had read some years ago. Dubai, yes, it was a man from Dubai. He had been so particular in cleanliness that he used to bathe seven times in a day in a water starved city. His dear wife was fed up of his cleanliness drive and they used to have fights over it every now and then, and one fine day the fight led the clean little man to vow. He vowed that he would never bathe again. 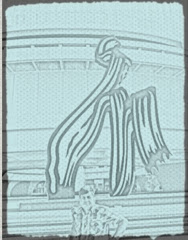 This is a real happening friends and I had read of it in newspapers then. The salient feature that resulted in his life was that within two years his wife had filed a court suit on our little poor fellow for a Divorce, unable to bear his stench.

This had happened for real and I mused, could this be applicable here as well. Will it work in Indian scene. Mind lay puzzled. Thoughts imagining the worst as if saying, never give it a thought. You know the  aim of your beloved, one hit and all of your gimmicks would dissolve in the thin air.

I knew my mind was my best companion, leading me through the thick and thin of life impeccably.

Again it had successfully thwarted my severe fall in the ditch.

This has been inspired by and written for a contest at indiblogger,

Close Encounters of the Smelly Kind.