Posted by : RioZee Sunday, March 16, 2014
My mind was in a state of doldrums. The world stood still for me. The time wasn't moving an inch. I knew very well, this very time that was moving sluggishly like hell would start flying and I would have tough time controlling it's flight.

It happened just as I had anticipated.     Decision had been taken and I immediately sprung into action. The watch started mocking at me. I hurriedly put in some clothes in the bag, picked up my wallet, laptop and hurried out to catch a cab.

I had wasted time literally, in deciding the road to take. The crossroads of life that forked away into the abyss, haunted upon the mind. It was a very hard decision and I had made up mind to the haunting question,"How far could I go, for my love." Yes, I could go as far as far could be, even if it led to a point of no return, and as the cab entered the airport area, I was all ready to jump out and hasten at the British Airways counter to get the first available flight to London.

I had taken this step after much deliberate thinking, weighing in all the factors, and this step had been so heavily chained to the ground with the expectations of relatives and family that it needed immense gut and strength to break free and then judiciously sticking with my decision with full heart and soul. There could not be any part commitments. Either I was in, or I was out, and I had decided.

The long line at the British Airways counter gave a pang in my heart. The only consolation was that line was moving a tad fast but I was in real goddamn hurry, and the old man at the back of me was pushing his whole weight on me deliberately. Some how the ordeal lasted and I succeeded in my getting the first hurdle towards going farther towards my darling love. I had taken the leap in to the oblivion of love.

After all the tenuous wait, at last I had boarded the plane and seeing the nasty old man I had encountered earlier, eyeing me with hungry eyes and I knew instantly I had no respite but to bear the hell during the 5 hours of the flight. Little did I know at that time that this nasty little man was going to be another tedious feather that would be making me reconsider my step towards the Love of my love life.
Many people say very easily, "I will jump off the building if you say so, my love" or "I will bring the stars at your feet, my darling." But these are just token words. Nobody says "I will tolerate your Mom & Dad's presence all the time and do all the errands as they order me to do."

I had plunged in to the den of Love, and now nothing was going to stop my unending crusade to achieve my end.

This man was all the more eager to start the chat, as I was trying to surf the program on the t.v. screen in front of me, trying my level best to ignore the old man.

He didn't waste time in prelims, and started casually, "Rio, my boy, I see you are all tensed up dude."

I gaped at him, how in the God's name did he know my name, but thinking he stood at back of me in the line, so he must have overheard me.

"And what your good name is Sir?" I somehow blurted.

This was enough to start the engine of the old man.

"My wife lovingly calls me Fatso, but my daughter calls me pop." Beaming with pride, he disclosed.

Now I couldn't call him Fatso nor pop, and as I was thinking of appropriate question, Fatso began his mission torment, "you look pretty much disturbed, son, as if on a very crucial mission of your life."

I knew I was disturbed, and this nasty looking man was all the more disturbing, but What could I do to stop the nasty blabber. This man called me son as well, I wondered why. My mind contemplated, among all weird happenings, was he by any freak chance of bad luck my Father In  Law, and I brushed aside the thought as just impossible and concentrated on his talk.

"Where are you lost, son." Fatso chirped again

How dearly I wanted to strangulate this man, but..alas...

"How far can you go to for your love" Son, he again bombarded a question, as if I was going to marry his daughter, but this gave me the ground to start my rhetoric.

"I can kill and get killed, if that can satisfy you, old man." I said and tried to concentrate on programme surfing. 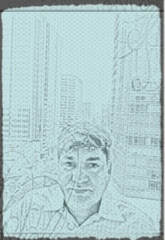 Little did I know then that he was my Father In Law to be, and he had been stalking on me for the love of his daughter. He had been following me, and sitting arrangement too he had managed next to me by request to the British Airways staff.

My ordeal that pursued later could lead to a full novel of the horrifying tale, so I put down the pen, with the memories of the past as past ones and now that I am in the middle of the ocean facing different weathers and rowing the boat of married life with my love by my side, and the most apt thing I can think of to say is, "the courage to go the extra mile, where others throw in the towel," I will always go, for my Love.

This has been inspired by and written for a contest at indiblogger, here is their link to see their video click here below