Posted by : RioZee Tuesday, October 21, 2014
AccurateFuturePrediction
The most accurate and precise and drastic prophecy was delivered by Jacques Cazotte at a diiner party in the year 1788 in Paris. One of the learned person present at the occasion Jean Francois de la harpe wrote a detailed account of the utterances of Mr. Cazotte.
Host of the dinner party was a distinguished nobleman and all highly acclaimed courtiers, lawyers, writers, ladies of noblemen were present at the venue. Jacques Cazotte himself was a well known writer who had authored a book on occult romance, "le diable amoureux". "The Devil in Love". Great dinner it was and wine had flowed freely and people shared their thoughts freely, mocking religion and voicing their thought on a revolution to do away with superstition and fanaticism.
Suddenly Jaques Cazotte had stilled everyone by his prophetic announcement. He had said, "ladies and gentlemen, be content, that you will all see the revolution that each one of you are so eager to witness. I am something of a prophet and i am sure you all will see it. You Monsieur de Condorcet, die prone on the stone floor of prison cell. You will perish by the poison you would have taken to save yourself the execution pains. And you Monsieur de Champfort, will cut your veins 22 times with a razor and you will still not die, until some months later. You Monsieur de Nicolai, you will die on scaffold. You Monsieur Bailly, will also die on scaffold.
Noblemen began to whisper that this man had gone mad, or he is just joking.
La Harpe, the host anx a noted free thinker objected that Cazotte had not predicted his fate.  To which Cazotte had said, "Ah, for you, I see something more extraordinary. You will become a christian." Listening this entire table had started laughing and Champfort said he was relieved that we all will not die until La Harpe becomes a christian and we are practically immortal if we go by his statement.
Duchesse de grammont asked what was the fate of ladies. Cazotte had said, "Your sex ladies will not offer any protection in this bloodbath. You madam la duchesse and many other ladies will be taken to scaffold in executioners cart with hands tied behind your back like common criminals.
He shocked everyone by saying that no one will be spared, not even the king and queen of France.
This prophecy ranked in most accurate prophecies ever recorded as within five years Cazotte's vision had been met with in every detail as he had described.
This is a copy of painting of Jacques Cazotte giving his prophetic sermon at the dinner party taken from encyclopedia. 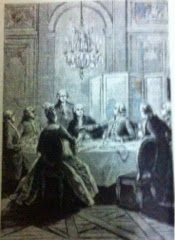 Tomorrow another saga will unfold, [only if readers expressly demand by commenting lavishly] stay attuned after commenting.