True travails of a Virus

This was no lowly virus, a great one with a honorable lineage. Since his birth he had seen no dearth of resources of any kind with his obedient masses ready to lay their lives for him at a single command.

He had in him the urge to explore different areas. He had widely traveled all across India freely without slightest discomfort using ample conveyance system present but now arose in him the desire to travel to a foreign destination. He had heard of Singapore a lot and expressed his desire to his father. His father was a little worried. He knew he couldn't show him any reason and he risked his life there. He sent with him thousands of viruses to take care of his health and engulf him at all times to save his life. He embarked upon his journey along with them nicely tucked upon the inner compartment of a suitcase and had lost all his companions army at the Singapore airport itself. Had their spray been little more stronger he too could have collapsed but by sheer luck he was saved at the martyrdom of his loyal companions. He was dismayed to see an atmosphere clean of any virus. He longed to see one of his kind and none was in sight. Suddenly his eyes lightened up seeing a small fragile virus going into the earth via a buried pipe. He followed him hoping to find some company. He was all starved and knew he couldn't fare well in this land. He cursed himself for not obeying his father.

He traveled very deep into the soil following the fragile weaker virus. He was relieved to find some dingy air, and his body gained some strength. He was surrounded by ample viruses  speaking different language which he couldn't fathom. All were shouting some slogans and quieted upon arrival of a king virus.

The king virus was stout and elegant. Seeing the stranger virus he started speaking in the Indian language which baffled him. He had thought he would die in sn unknown land unable to express himself to these wobbly speaking nuts but alas!!. There was some glimmer of hope. King confided in him that he had come here years ago from India itself and saved these fellow viruses untimely death by his sheer intelligence. He told him of the regulations of his regime. The surviving breather was channeled on payments and he was given a sample nourishment free when king ordered his servants to remove the controlled opening of a miniature hole. He had never in his life tasted such unique taste. All his fatigue gone in a jiffy he longed for more but the opening was concealed immediately. Now came the offer from the king he had dreaded. Either marry his daughter who was eyeing his eight pack abs covertly and enjoy  the kings patronage free of cost or be shown the way to return to his homeland. The choice was very difficult to make and he stood on doldrums. His affinity to return to his homeland or enjoy the kingdom patronage. The choice was real hard. It would have been easier for him to decide had he not tasted the sweet aromatic gush of breather or the marriage offer.  He decided to get a return passage with a heavy heart.

The king had then asked him if he was well versed in the Indian yoga system, to which he had shown his bad luck that though he had heard of it here and there but he hadn't given it any serious thought. King then said that first he will be taught the salient breath control via samadhi. He was utterly dismayed. These things which he had never given a damn shit for was so much handy in life saving. Soon he had grasped the technique of staying in a dead posture breathing nothing for days. When he was ready king had sent him to the nitrogen ice factory where he had to let himself into the nitrogen chamber in dead posture to be frozen within the nitrogen ice for days until he got packed with the ice-cream cubes and shipped to India back by air.

He had no other choice. This was the safest route for him. If this nitrogen didn't melt in five days, his  grave could be in this nitrogen itself. He had prayed solemnly asking the strength to bear the tough ordeal and let himself into the flux of nitrogen in the newly learnt samadhi posture to travel back to India.

He saw into my eyes through the microscope pleadingly as if saying all that he had said was true and let him join his fellow brethren.I triumphed over catching hold of a leader virus. I knew he was in for a nightmare once he saw what had happened to his fellow beings while he had been away, under our new regime of "Swachh Bharat". I wanted to show him that his days were over and done before giving the killing shot. I felt  an overwhelming pity for the poor fellow. I tried to lower the blow on him while showing him around. I could see the tears rolling in his eyes as he stood upon his father's burial place. I told him that his father was so lucky to have been killed by none other our Prime Minister himself. No other virus in the world can boast of such a heroic stature. Just see it like this that God Rama killed Ravana giving him Moksha. I cannot say your father got Moksha, but surely a small token of appreciation I will try to get a tombstone erected stating "Here lay virus killed by our Prime Minister Narendra Modi Ji." Then I took him to Mumbai where his brother lay with his kingdom swiped away. I consoled him saying, he couldn't even imagine a death by the Godly hands of none other our heart throb, Sri Amitabh Bacchan ji himself. How could I explain to him how lucky even I would feel to die by the very hands of Our Legend, but these things didn't seem to go into his head.
He stood crying profusely.

It was then that he pleaded to be sent back to Singapore that my dream broke. I lay in bed for hours thinking over and over again at the great ascent of my mind at cellular level.

Think friends think and act, before its too late. 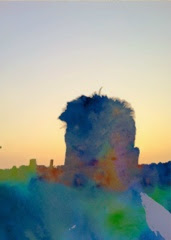