The Ship, Casino, and Me, and My Wife

Posted by : RioZee Saturday, August 8, 2015
I had driven to a cruise ship Casino in America with my dear wife and ship had sailed and I had  settled my backside at the poker tournament table and my mind was on high alert, as one wrong decision and I could be thrown out by my seasoned older opponents. My dear better, recently acquired half was stationed at another black jack counter to try her luck at gambling, away from me as no companions were allowed in the tournament zone. I had left her with just a hundred dollars in cash and no credit card to restrict any unwanted losses.

My dear darling wife was surprised to see me drive a hundred miles to casino without the help of gps. The route had been imprinted in my brain and literally I could reach the place blindfolded.

Here, at my table, one smart ass threw in a feeler on the table, "guys, I wanna sell my wife. Any takers."
I was shocked to hear the statement. How in the hell could they sell another person. This wasn't India. Here they could be arrested instantly upon one small complaint from women's rights commission and he would rot in jail. I didn't know then, that he was ready to go to jail, just for the yearning of peace.
Just then another monsieur blew his trumpet, "can take mine FREE, but No return allowed."
I wondered why were they so pesky. They could easily divorce here and fly, unlike India.
In India they could be easily thrown in jail just for thinking of a divorce by fabricated small dowry demand case and rot for life. Where was my mind going? With a resolve to concentrate upon my game I tried to focus my mind upon the cards. My wife was just a month and a half old and I was flying high above the seventh heaven. My wife was very sweet and understanding. I could never even dream of parting from her.

I had to go all in at a point I risked being thrown out, and what sheer luck, I won that and that was my turning point in the game. I shouldn't boast but I came first and raked 920 $ as prize.

I hurried fast to the table my wife was sitting to show her my James Bond wins. Luckily she too had doubled her 100$ and I, the great tried to guide her by my black jack skills but my guidance was proving fatal as twice her tokens were seized by the dealer. It looked to me as if he was annoyed by my presence. What could I do? He should have understood that if she had smiled at him, it had been just a courteous smile, nothing else. I sometimes seriously got worried at her smiles, that triggered instantly all by itself anywhere. I could sit for hours watching her smiling face but alas!!!.

I decided to call it a day before this nut of a dealer whisked all the wins and portray my wonderful seasoned skills on black jack like a big farse. It was a shame he didn't remember a dime about how much money I had just mercilessly given away when I came there as a bachelor. In Fact I knew very well he enjoyed my goofing advice to my wife to ask for another card. The look on my wife's face was as if she would eat me alive as I had duped her winning streak. Since I was her husband she did have every right though and I persuaded her to leave the table and enjoy as I had won enough. I wanted to call it enough as this was my first visit to the Casino with my wife and I wanted it to end in a goddamn jubilant mood. My previous experiences had been bad, so me, the Bond, James Bond of the day, strode towards the cruise ship's bow, with my darling wife in tow, to stand elegantly in the pose of Rose and Jack of Titanic fame and God forbid I do not fall into the jaws of the sharks, so pray my dear friends for Rio to come back safe and rejuvenated by the fiercely flowing winds trying to makes us both fly towards the heavens above.

This is pure fiction with traces of truth in it. It has been inspired by the topic at Indiblogger for a humorous story. 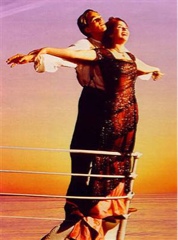